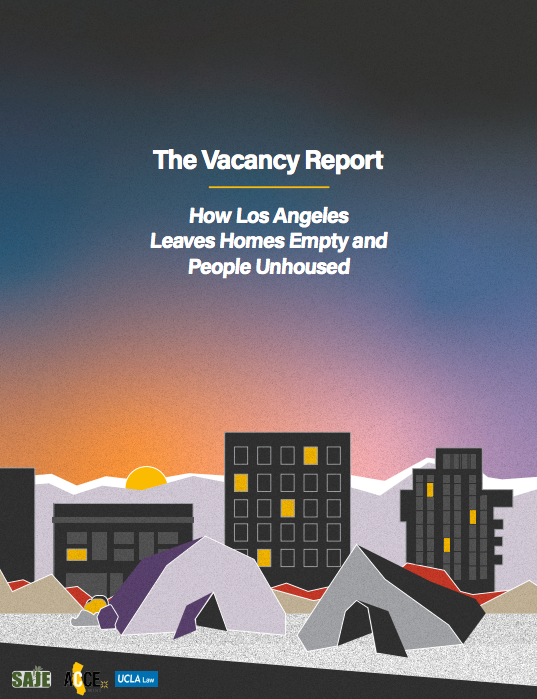 Because of the unprecedented housing crisis in Los Angeles, few people will be surprised by this report. Our housing system fails to house tens of thousands of the city’s residents and leaves hundreds of thousands more struggling under astronomical rents. But for some, the housing market is working exactly as they would prefer, delivering unprecedented profits to a privileged class of investors who have bent the housing market to their interests. Rampant speculation has resulted in a housing system that works in the interest of a few, to the detriment of the many, along lines of race and class.

Some of the outcomes of this dynamic are detailed in this report. With more than 36,000 unhoused residents, Los Angeles simultaneously has over 93,000 units sitting vacant, nearly half of which are withheld from the housing market. Thousands of luxury units across the city are empty, owned as second homes or pure investments. At a time when the city should be doing everything in its power to house people, over 22 square miles of vacant lots are owned and kept vacant by corporate entities. The power of finance, which has brought 67% of the city’s residential units under its control, is also manifest in the ability of speculative developers to remake neighborhoods to fit their own vision. The pattern of development occurring all across Los Angeles further contributes to the vacancy and houselessness crises, as new units are priced beyond the reach of most Angelenos, leading to an excess supply of high-rent housing that fails to lease and therefore fails to house people, coupled with a crisis of unmet need for housing for the most vulnerable.

High vacancy rates in expensive luxury housing developments are a core symptom of a broader speculative housing system that is failing to benefit our communities. Speculative practices yield an unbalanced production of vacant luxury development at a time when evictions are fueling a loss of affordable rental units, increasing numbers of corporate landlords are unaccountable to lowincome tenants, and we are failing to build enough covenanted, deeply affordable housing. All of this accelerates our houselessness crisis. We must prioritize using housing to actually house people and reorganize the market to meet this goal.

This report suggests a place to start, by proposing a suite of policies to curb the speculative excesses of the housing market and promote the use of housing for homes. Los Angeles is currently suffering through an unprecedented public health crisis. COVID-19 has made the immediate shelter of all Angelenos, already a moral and political crisis, into a public health crisis as well. Beyond the immediate need for shelter, the economic devastation that has resulted from the pandemic has put hundreds of thousands of renters at risk for eviction and houselessness, magnifying the already desperate need for new permanently affordable and stable housing. The policies suggested in this report can help mitigate some of the effects of the current crisis on renters.

COVID-19 has also deeply impacted the city’s coffers, and the need for revenue-generating policies to fund the necessary expansion of affordable housing and service provision is apparent. The city should not fail to act on policies that will provide much-needed revenue for affordable housing and services for the unhoused, and curb harmful and speculative behavior in the housing market at a time when disaster capitalists circle.

Thousands of units are held off the market in Los Angeles. Although normal vacancy occurs when units are waiting for new residents to move in, tens of thousands of units in Los Angeles are being withheld from the housing system for other purposes. Over 46,000 units are held in a state of non-market vacancy—more than one for every unhoused person in Los Angeles. Many thousands more units are withheld from the housing system by landlords listing them at high rents that keep them vacant long-term. This is a real issue with significant implications for addressing the housing crisis. Many of these units are kept vacant by owners seeking to profit by speculating on the increase in property value, returning properties to the market only when rents are high enough for their liking.

We are building homes, but only for the rich. Amid an unprecedented shortage of housing for the people who need it most, Los Angeles is building plenty of homes. Unfortunately, much of it is accessible only to the wealthy, with 97% of rental units currently under construction in downtown L.A. classified by the commercial real estate data service Co-Star in the most expensive and luxurious “4 & 5 star” category, in which rents average over $2,800 per month. Additionally, the benefits of such luxury construction do not simply “trickle down.” At similar rents, newer buildings are consistently more vacant than older ones, and high-rent units are plagued by higher vacancy rates at every affordability level. This suggests that the pattern of development in Los Angeles, which incorrectly prioritizes the construction of luxurious units on the assumption that this increases access to housing for all, will never resolve the housing crisis.

Property in Los Angeles is increasingly financialized. Los Angeles is increasingly a city that is owned not by people but by corporate entities of all kinds. Nearly 67% of all residential units in the city are directly owned by investment entities. The same is true for over 22 square miles of vacant lots, a massive amount of land going undeveloped to benefit corporations and a small class of investors. With only a tiny fraction of people having investments of any kind, this massive concentration of ownership represents a speculative property market set up to build wealth for the few, not the many. Additionally, the lack of financial disclosure requirements that apply to corporate property owners as well as the ease of creating shell companies make it nearly impossible to identify who is benefiting from owning housing in Los Angeles.

Speculation removes thousands of units a year from the market. Rent control keeps thousands of families in their homes by preventing them from being forced out because of rent hikes, but unfortunately, many landlords use loopholes to evade rent control regulations and raise rents as high as they want when the unit becomes vacant—a process called vacancy decontrol. Additionally, the vast majority of tenants facing eviction lack legal representation. Speculative landlords commonly exploit the rent control system by forcing tenants out through illegal means to benefit from vacancy decontrol. In addition, thousands of rent-stabilized housing units are removed from the housing supply every year through the use of the Ellis Act—a legal tool favored by speculators to mass-evict tenants.

Cities across North America are turning to vacancy taxes to combat speculation and generate revenue for affordable housing. Many North American cities, especially those with housing problems similar to Los Angeles’, have enacted vacancy tax policies to combat speculation and raise revenue for the construction of affordable housing. Inspired by community groups mobilizing for housing justice, many cities have passed and implemented such policies (including some in California). These efforts should serve as a model in Los Angeles.

A vacancy tax can be done here. A penalty for keeping units vacant is not only desperately needed but also is achievable within the confines of California law. Taking other cities’ policies as examples and diving into the legal context surrounding taxation, policymakers in Los Angeles can craft and implement a vacancy penalty policy.

Complementary policies are needed. A vacancy penalty, although important, is not enough to solve the housing crisis. Other complementary policies are necessary to advance a comprehensive response to the harms of the speculative housing market, including municipal disclosure requirements, better data collection, limits on condominium conversions and demolitions, a real estate transfer tax, flipping tax, and an out-ofstate transaction tax.

Los Angeles needs better public data on vacancy. Vacancy is a complex issue, and good data about vacancy are hard to find. Given the ongoing housing crisis and the many ways in which vacancy can have deleterious effects on a city’s housing system, understanding vacancy in Los Angeles is crucial. The structural factors that undergird vacancy are not all benign, and good data are paramount to address these issues at their cause.

You can read the full report here.