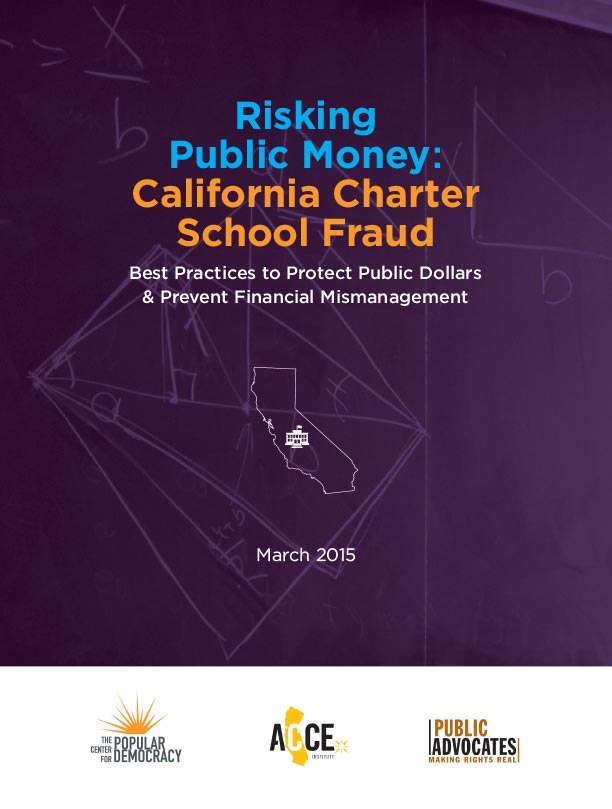 Despite the tremendous investment of public dollars and the size of its charter school population, California has failed to implement a system that proactively monitors charters for fraud, waste and mismanagement. While charter schools are subject to significant reporting requirements and monitoring by oversight bodies, including chartering entities, county superintendents and the State Controller, no oversight body regularly conducts audits.

In 2006, California took a step in the right direction by amending the Charter Schools Act to permit county superintendents who suspect fraud or mismanagement at charter schools to request an “extraordinary audit” from the Financial Crisis and Management Assistance Team (FCMAT), a state agency charged with helping local educational agencies fulfill their financial and management responsibilities. Although FCMAT only conducts an audit when requested to do so, its findings reveal internal control deficiencies and various forms of mismanagement ranging in severity and form— from inappropriate self-dealing by charter school staff to the spending of thousands of public dollars without documentation. Even after 2006, charter schools in California continue to operate year in and year out without regulator-level audits that are designed specifically to determine whether the public dollars funding these privately managed schools are being spent properly. This lack of appropriate government audits is a problem, especially given the findings of FCMAT’s audits.

The number of instances of serious fraud uncovered by whistleblowers and the FCMAT suggests that the fraud problem is likely not isolated to the charter operators that have been caught. In fact, California’s charter oversight system’s deficiencies suggest that the $81,400,000 in fraud, waste and abuse by charter operators that has been uncovered to date is likely just the tip of the iceberg. Based on conservative estimates, California stands to lose more than $100 million to charter school fraud in 2015. The vast majority of this fraud perpetrated by charter officials will go undetected because California lacks the oversight necessary to identify the fraud. In this report we describe three fundamental flaws with California’s oversight of charter schools:

To address these serious deficiencies in California’s system, we recommend the following reforms:

Given the rapid and continuing expansion of the charter school industry and the tremendous investment of public dollars, California must act now to reform its oversight system. Without reform, California stands to lose millions of dollars as a result of charter school fraud, waste, and mismanagement.